Manufacturing Brick: An Ancient Process That Is Constantly Evolving

Few manufacturing processes have had the impact of brick on civilization. Some estimates date brickmaking back to 7,200 B.C. It’s part art and part science. The rich hues are quintessentially natural and vary based on the area from which the clay is mined. This affords architects and builders a stunning design palette.

However, the science involved in this ancient process is surprisingly intricate and continues to evolve, even today. For one of the leading brick manufacturers - Acme Brick - the scientific nuances of this process are on display at the company’s Technical Center in Denton, Texas.


If kilns are the beating heart of Acme Brick Company’s brickmaking operations, then the “Denton Lab” is its brains. Click here to learn more about the types of brick Acme makes.

The Denton Lab of Acme Brick bristles with every sort of testing equipment imaginable. It also includes clay mixers, extruders, and several brick kilns – essentially an entire brick plant in miniature – all under the direction of manager Mat Tramel.

This is also where professional training is conducted. The center’s training room hosts training seminars for architects as well as mining and kiln operators. It’s also the home of Acme’s exploration department, where new potential sources for raw materials are evaluated.

The Secret Sauce: The Mix

Early in the brick manufacturing process, mined mineral deposits are ground into fine particles. To assure product consistency, plants send clay samples to the lab for particle size equivalent (PSE) analysis. Highly trained technicians mix the ground clay with water as you would a milkshake, then take measurements. PSE determines how much clay, sand, and silt are present in the sample, which in turn assures that it meets that plant’s standards.

In a separate testing facility, finished brick are evaluated by four key measures:

Initial Rate of (Water) Absorption
Technicians weigh a finished brick, set it in a pan filled with an inch of water for one minute, and then repeat this by weighing it again to determine how much water the brick absorbed.

Compressive Strength
This involves placing a finished brick in a heavy-duty hydraulic press – and then turning up the pressure until the brick fails.

Freeze/Thaw
This test also measures brick’s ability to stand up to extreme weather conditions. Freezers and kilns are used to rapidly cycle a brick through wide temperature swings.

Efflorescence
If the body of a brick has a high sulfate content, those minerals will leach out of the brick and produce white (or even greenish) deposits on the surface. To measure this phenomenon, called efflorescence, a brick is set in a pan of water for a full week, then dried in an oven. The purpose of the test is to assure that any efflorescence that might develop during installation can be removed with careful cleaning when the job is complete. 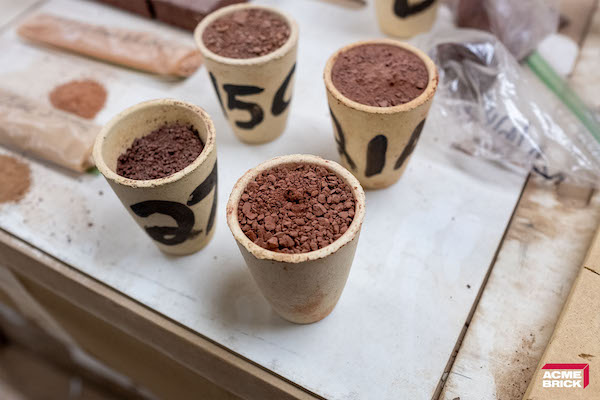 From evaluating sources of raw material to prototyping colors and blends, the Denton Lab Technical Center is where Acme’s manufacturing future takes shape. These efforts are led by Jim Krueger, a longtime Acme associate who is the manager of Research and Production Services.

While clay may seem to be an inexhaustible resource, it can be a challenge to find new deposits of this soil-based material. The challenge involves finding clay that is suitable for brick manufacture and is available in sufficient quantities to support decades of mining. Acme’s Exploration Department meets this twofold challenge every day.

New raw materials can come either from existing sources - found either farther out or deeper - or from entirely new deposits. In both cases, the evaluation process begins by taking long, cylindrical “core samples” at regular intervals in the area under study. This reveals the layers of clay in the deposit area.

Back at the lab, the samples are evaluated not only for their structural suitability but also for the desired color.

“Each section of a core might produce a different color body,” Tramel said. “If the plant has a target color of orange, we may be able to use the full core sample area material. But if it comes back too light, and we’re looking to make red brick, then we would look somewhere else.”

Technology is very much a part of the exploration process. The latest versions of unmanned aerial vehicles (UAVs), or drones are deployed to aid in surveying.

The Denton Lab is also a center of new-product development. To facilitate this process, it is configured for small-batch production rather than high volumes.

Many factors influence the appearance of finished brick These include: the composition of the clay itself, firing temperature, additives, and surface coatings. The lab can test them all.

The quest for the next Acme Brick “bestseller” generally begins with the shipment of a large bag of brick clay from a plant to the lab’s receiving area. This clay gets graded, placed in large metal bowls (known in the trade as “hats”) and then sent to a dryer. The next day, the dried clay is ground and passed through screens, to a fineness that is consistent with the plant’s specifications.

This ground clay goes into a mixer, where water is added to form large balls of brick “mud” – again, according to the plant’s native specifications. These are fed into an extruder to make long strips, which are cut by hand to make 3-foot bars - ten bars in all.

“The first two,” Tramel said, “go for firing, bars three and four for dry testing, and two to the plant so that they can run their own tests and compare their results to ours. The rest are spares in case of accidents, power outages, or other unforeseen challenges.”

Before firing, bars are sent to one of four dryers, one of which is computer controlled and pre-programmed with up to 100 temperature profiles (known as “heat curves”) that simulate conditions at each plant.

Finally, to compare different firing temperatures on a brick sample, a bar of clay goes from the dryer to a specialized kiln called a “gradient furnace.” This furnace can maintain up to eight temperature zones, ranging from 1,800 to 2,200 degrees, concurrently.

From Baseball Stadiums to Paperweights

For more than 130 years, brick made by Acme have helped define iconic buildings such as those found on the Texas Christian University (TCU) campus in Fort Worth and Gregory Gymnasium on The University of Texas campus in Austin. Spectacular hotels, legendary office buildings and even large sports arenas such as the recently completed stadium where the Texas Rangers professional baseball team plays its home games have all had that hard-to-define, but immediately recognizable “feel” of Acme Brick.

The millions of brick used for commercial and residential construction began their journey to history at the Denton Lab. The lab also excels in another kind of small-batch production: the miniature, felt-backed Acme Brick paperweight. Given to plant visitors, handed out at trade shows, or left with valued customers, this souvenir has graced countless desks over the decades.

Commemorative units that mark an Acme milestone, such as a plant’s anniversary, will receive a custom stamp. Others receive a generic imprint. In both cases, making paperweights involves not just impeccable craftsmanship but also real artistry. “For stamping, we need to design thoughtfully,” Tramel said, “with larger lines, fewer curves to hold the detail.”

Paperweights are made the same way as test brick, he explained, but with a little more care. “We might sand the edges down to make sure they’re not sharp, and we might dry the bar a bit before stamping so the brick won’t crumble,” he said.

Most Acme paperweights are made from Denton clay blended to produce a color called “Ranger Red.” Occasionally, however, the lab will use brick clay from the Perla Plants, in central Arkansas, that produce brick with a white body.

So, the next time you see an Acme Brick project, whether it’s the paperweight on your desk, the building you work in, or even your own home, know that, thanks to the Denton Lab, you’re looking at one very smart building material!


With sustainability, energy efficiency and almost no maintenance required, Acme Brick is indeed the best thing to have around your house! Click here to talk to one of our experts.