An Acme Brick in the Guinness Book of World Records

There is something about achieving a place in the Guinness Book of World Records that strongly resonates among almost everyone. Runners long to be the fastest in the world and jumpers want to leap the highest. It’s human nature to want to be the “best” in a chosen field and have this feat listed in this iconic book of world records.

For the artisans of Acme Brick, who share a history with generations of colleagues in the 130-year-old company, that same passion abides.

This dream of manufacturing the world’s largest brick was attained in 2007, when the Acme team excavated clay from multiple locations, molded and then gas-fired a brick that was 9 feet, 8 inches long and weighed a whopping 9,300 pounds! There has never been another brick like it, and it even has a name — “Baby Clay.”

For perspective on this miracle of clay, a normal size brick that is used for building a house is 9 ⅝ inches long and 2 ⅝ inches tall. When laying them in a wall using a ⅝ inches mortar joint, that results in an even 3 inches X 10 inches unit. The weight of a standard brick is about 3 ½ pounds.

The process of manufacturing brick is ancient but the science surrounding brickmaking continues to evolve even today. Homes that are built from Acme Brick are guaranteed for the life of the structure. Click here to talk with a brick specialist.

Lessons Learned From a World’s Record

While the promotional benefits of producing the “World’s Largest Brick” have been many, the size of this gigantic brick offered several lessons for the people who created it. The leader of this group of proud papas was long-time Acme Brick manufacturing expert, Harland Dixson. He shared some lessons learned from this process.

“The drying process is critical to making brick,” Dixson said. “The firing process for a normal brick would be in the neighborhood of 48 hours drying time along with 30 hours of kiln (actual firing) time,” For Baby Clay it was quite a bit different. The drying time was about 14 months, and the firing time was 29 days.

“In order to determine if our process would work at this scale, we actually made a few brick that were 36 inches long by 12 inches high by 12 inches wide. We made 4 of these to see if we could achieve our objective before we started making the big one. The one that held together to the finish was actually the fifth version.

“We had to learn how to control the shrinkage of a mass this big to ensure it would all shrink together. You can imagine trying to make something big enough so the 4 percent shrinkage would be the correct size, when all the shrinkage was gone. Some of the shrinkage is from moisture in the clay and the other is from the firing process. So, our biggest challenge was to get this big block dried and shrunk together without cracking so it would be structurally sound to use as a promotional item.

“Because of the mass, we did not want the brick drying too fast, so we kept it covered in cloth and the cloth moist, so we did not dry too fast. You might say we “babysat” Baby Clay through the process of drying. 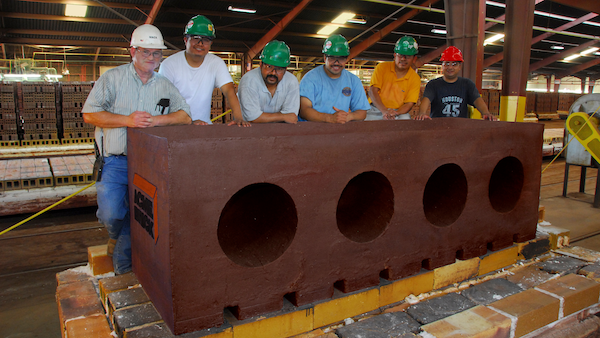 “Finally, we made a special “kiln car” so we could utilize it for drying and for a foundation to build a kiln around. A kiln car is a cart that rolls on tracks onto which the brick are loaded and slowly pushed through tunnel dryers and the kiln. The cars are used over and over for handling the brick as they are made, dried, and fired on. Once fired, the brick are unloaded off the cars and placed into packages that are delivered to the customers for use.

“Without this special car it would take so long to dry and fire we could not send it through the normal dryers and kilns. We found that we had to control the drying so that Baby Clay would not dry too fast and crack.”

The promotional benefits of Baby Clay have been outstanding. After all, who DOESN’T want to see a 9,300-pound brick up close?

“Baby Clay is used as a promotional tool even today,” Dixson said. “It has made appearances at schools and parades. It appears in some type of parade - Christmas, Easter, or harvest - every year. As we speak, Clay is currently in Elgin, Texas for the “Hog Eye” festival.

“When he is not being used for an event, Clay is kept in a shop on the property of the Acme Brick Denton plant which is managed by Allen Serrano, who is the manager of the truck shop at that location. Allen and I have worked together for many years and he was working at Denton when Baby Clay was made. He was instrumental in getting a truck to carry this massive brick and does a great job keeping Baby Clay and his ride maintained so they can make appearances.” 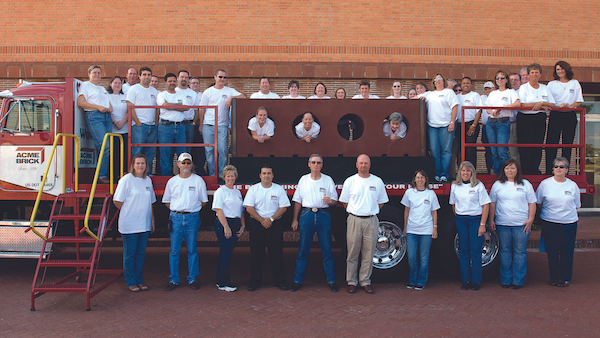 Perhaps the best part of building the world’s largest brick is the effect it has had on the camaraderie among the Acme Brick team. It started with the basic ingredients.

“We collected raw materials from every manufacturing facility that Acme Brick owned at the time, '' Dixson said. “And we put a small amount of each into Baby Clay. The raw materials were clay mineral, Shale, cement and aggregate from the block plants and aluminum shavings from IBP products.

“To this day, I am still very proud to say that I helped make Baby Clay - The World's Largest Brick!”


Brick, in a wide array of colors and styles is still the best thing to have around your house. Click here for some BIG brick ideas.