In a world where everything seems “virtual” and often superficial, two things have remained solid and strong, day after day for 131 years. These are Acme Brick products and its leadership. For the past 40 years, the team managing the iconic products and the people who make them has included Dennis Knautz, the company’s President and CEO. Now he is preparing for a new chapter in his life.

The company has announced the retirement of this highly respected construction industry executive, effective March 2023.

For Knautz, it has been a great run. After completing his undergraduate and MBA studies at Fort Worth’s TCU, he joined Acme as Controller, was promoted to Vice President- Finance in 1988, and served in that position until 2000. He became Executive Vice President and COO in 2004, and in 2005 he was named Acme’s eleventh President and CEO. He is among the longest serving Presidents in Acme’s 131-year history.


The associates of Acme Brick have always been the company’s most valuable assets. Despite wars, economic challenges and crippling pandemics, the resilience of the Acme people and products remain as strong as they have always been. If this seems like an organization you might feel proud to join, click here and let’s talk about the future.

Just three years into Dennis Knautz’s tenure as CEO, the Great Recession began. Fueled by lax subprime mortgage standards and escalating energy prices, it pushed the United States into the worst crisis since the Great Depression.
The ensuing housing collapse forced Acme Brick Company to reduce production at almost all its plants, lay off workers, and lose money for the first time in the company’s history. This continued for five tough years. Through the chaos, Knautz diligently guided the company and when it came out on the other side, it was stronger and ready to take on new challenges.

With a steady hand, Knautz steered the company through many other storms including the recent COVID epidemic with its supply chain shortages and effects on worker availability. Through it all, the company continued its upward trajectory. 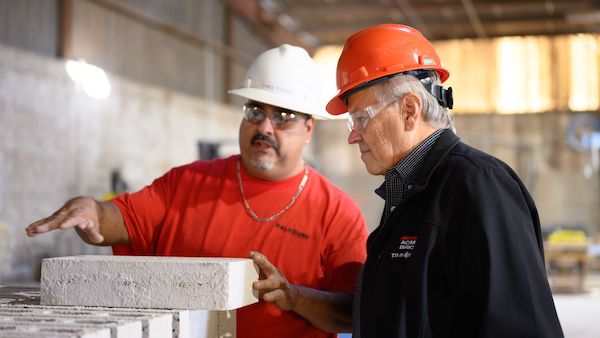 Under his leadership, Acme led the nation in brick shipments for many years, delivering more than 32 billion bricks to residential and commercial customers over that time. He also expanded Acme’s community engagement with many organizations including the Texas Association of Business, the North Texas Commission, and North Texas LEAD (Leaders and Executives Advocating Diversity).

In 2016, he accepted, on Acme’s behalf, the Fort Worth Chamber’s “Spirit of Enterprise” award. Nationally, he was inducted into the Brickman’s Hall of Fame in 2019 and has also played a vital role in the Brick Industry Association, twice serving as its Chairman, and being recognized with its Lifetime Achievement Award in 2020.

Ed Watson will bring a wealth of experience to his new position as the next President and CEO. He will soon be celebrating his 40th year with Acme Brick, previously serving in the roles of Vice President-Production, General Production Manager –Concrete Operations, Regional Manager-Featherlite Building products, General Manager – Texas Quarries and Plant Engineer – Featherlite Building products.

“Ed is a personable and engaging leader who has proven to be an outstanding manager,” Dennis Knautz said. “His leadership and motivational skills will now be put to use in all areas of Acme. I have every confidence that he will continue Acme’s long-standing commitment to excellence in this newly expanded role.”

Great organizations plan for seamless leadership succession. If you would like to be a part of a company that is as strong as its products, click here.

See also
The Top 10 Trends In Home Design For 2023. Plus, 10 That Are Officially Done!
Navigating the Maze of Home Renovation: New Study Highlights 6 Factors To Consi…
Want To Build A Sustainable Outdoor Entertainment Space? Here Are 5 Tips.